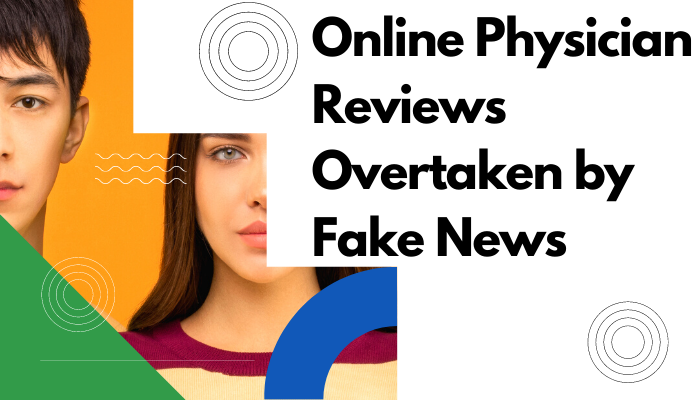 Reviews seem to be an important source enabling consumers choose products and services. Lately, online physician reviews have been found to misrepresent facts and in the process damage the reputation of providers.

Narrating an incident Deborah writes that she had a frustrated patient call her office to schedule an appointment. The patient asked for a doctor who did not have negative online reviews. Noting the sad state of affairs, Deborah states that a fake or inaccurate online physician review has a potential to mislead the general public about the capabilities of health care providers.

What is the purpose of writing a fake online physician review?

According to Deborah, the popularity of social media has made many people write about health care topics. These writers have little-to-no- education in the field. As a result, many physicians have joined  social media, and with their experience share information.

Deborah states that people get too emotional online, and this emboldens them to act in ways that they never would in real life. Further, she states that they do not show respect  to people who spent years becoming educated in their fields. Many people according to her write fake physician reviews simply because they do not agree on hotly debated topics.

We do not live in a Utopian world states Deborah, where association with people is limited to people like us. Learning to have respectful dialogue benefits everyone, she states..

What prevents physicians from defending themselves from these reviews?

Deborah points out that for online reviews posted by actual patients, they cannot be responded to by physicians, since they are not allowed to refute or contradict any allegations against them because of federal regulations, called HIPAA. These laws prevent physicians from sharing any details about a patient’s healthcare information, she remarks.

Elaborating further, Deborah states that if a patient posts a complaint with a simple explanation, the physician would not be able to respond to it because it would violate HIPAA regulations, even acknowledging the medical issue exists would be in the breach of the regulations. Infact Deborah explains, that merely stating that someone is our patient would be deemed as violation.

Physicians, states Deborah have accepted that disgruntled angry patients may leave bad online reviews, these situations according to her are far and few, but what is most concerning is fake reviews by non-patients, which is absurd she states.

What kind of comments do fake online physician reviews include?

Deborah in the article explains that there are four common topics that lead to fake physician reviews. The intention, according to her, is clearly to malign the physician’s credibility because of a difference of opinion, the topics that they choose to comment upon include:

Vaccinations seem to be the target of an anti-vaccination group  that vilify physicians  advocating vaccinations. According to Deborah, because of the vilification campaign let loose by these groups, the US is facing a worsening crisis with the measles outbreak, which is seeing the most number of cases reported in 1992. The growing number of anti-vax Facebook groups have adopted the practice of a coordinated attack on physicians recommending vaccines, these attacks are happening everyday, she states.

Since the gun violence drastically increased in the US, physicians came together, calling for solutions to save innocent lives. In 2018, the National Rifle Association (NRA) took an aggressive stance, according to Deborah, as an attempt to prevent physicians from speaking out on the issue. These were orchestrated through condescending tweets asking physicians to stop talking about gun violence, and ‘stick to their domain’ . The physicians that treat the injured protested and in one voice declared ‘this is our domain’ .

The medical professionals that are engaged in dialogue about this issue, highlighted it in a new Twitter account.

Deborah states that gun violence is a public health crisis, and physicians sought solutions to save lives. Few days after the NRA assault, physicians wrote blogs, and appeared as panelists on numerous TV channels, explaining their position.

The gun advocates, according to her retaliated with online attacks on physicians credibility, while many of the online reviews still remain for anyone to read. These orchestrated campaigns were meant to mislead readers into believing that the concerned physician is not competent in treating illnesses .

Deborah in the article remarks that the US is blatantly divided on the topic of whether women have the right to choose healthcare decisions of their choice. Generally, this according to her, is a privileged discussion between a woman and her physician. However, with different states passing legislation  empowering the state to make the decision for women, it has led into a controversial crisis, according to her.

Physicians have the right and privilege to voice their opinion on social media, and if that opinion is different than others, it doesn’t imply that they are incompetent in managing thier professional duties as medical practioners, asserts Deborah, and states that their proffesional duties have to be evaluated, rather than their personal views on a social issue.

Dramatic changes have been happening in healthcare over the past decade.  According to Deborah, patients always called the doctor’s office to schedule an appointment with a physician. This has been a normal practice, however after an increase in the number of non-physician providers, it has confused patients, who are unable  to determine the credentials of a provider.

Deborah points out that the term mid level provider was initially used for health care providers that did not attend a medical school to become physicians. However, since they earn degrees at the masters and doctorate levels, these providers call themselves ‘advanced practice providers’, they instead need to be called non-physician providers, according to Deborah.

This group of health care providers, she states was intended to assist physicians with the management of patients, however they are treating patients without any inputs or guidance from physicians. These heated debates have been happening in social media, at the behest of nursing organizations that are claiming that their practitioners are on par and as good as regular physicians.

Many emergency rooms, claims Deborah have non-physicians treating patients without oversight. She states that one organization published a clear statement, that announced all of their non-physician providers must have physician oversight. This is not true, she claims and advises that at all hospitals and clinics it is important that credentials of the person providing care  must be insisted upon by the patient.

Another concern highlighted by Deborah in the article is about these fake reviews misleading people into believing that the physician has a poor reputation. Unfortunately, the fake physician reviews shall always stay on the internet, and according to her blog posts have been setup to guide and assist physicians in dealing with them

Assumedly, most online review sites she concludes will evaluate some of the reviews, and possibly delete them. Physicians have been recommended to hire reputation management companies, but the cost is exorbitant, according to Deborah.

She advises people not to evaluate highly trained medical professionals on the basis of online physician reviews. Tips on how to best use the reviews have been shared by her for reference.

Deborah Burton is a pediatric otolaryngologist who blogs at Dr Momma Says.